...And, in this case, definitely lose some. Such was my result by the end of my 3-hour game scenario from Fireball Forward's Mortain Counteratttack booklet, my first FF game in Calgary for over a year:

While I forget the name of the individual scenario I played against my opponent <blush>, it appears (after a single game) this scenario's play balance is reasonable [50/50] for both sides. The following is a photo during turn 3 (of 5) wherein my opponent's GI bazooka team tried ambushing my Panzer IV-H tank from its right flank. (Lower righthand corner.) Set against my eventual loss by game's end, these pair of smart alecks failed! See their 2d6 roll of...Snake Eyes!  ha HA! 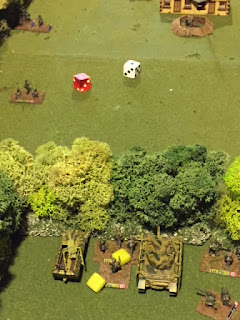