Tools of the trade

A brief word on my painting style. First off, I should mention I now find it difficult to paint at home. If I can, I prefer to visit a local Tim Hortons coffee shop or deserted food court and paint there. Therefore, a lot of my short-term painting efforts remain portable and I'll usually only bring along the paints I know I'll need. In the broad strokes, like many miniatures painters I probably become overly detailed in my figure painting over a painting period before I "reset." I justify that trend under this credo; "Paint it properly the first time, then overhaul the army once every decade or so, which is usually unavoidable anyway."  I can live by that.


First up: the two "heavier duty" glues I use. (#1) 5-minute two-part epoxy. During the summer these containers often sit in the car and heat in the daytime sun. Although this type of epoxy has a consistency of molasses at room temperature, when heated enough it can approach the viscosity of water. (#2) For fiddly items, I will first resort to using Krazy glue to temporarily affix pieces together and then later carefully follow on with using the two-part epoxy cement. Not ideal but often as expedient as anything else. Krazy glue is often sold in small tubes that look like Syrettes. That is, single use containers. After creating a small puncture in the top, I will try to keep the tube upright to get additional uses out of the Krazy glue container.  This is often successful for several uses. 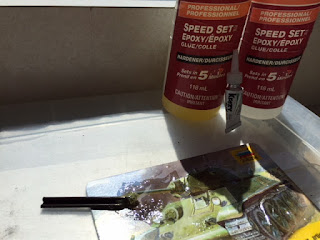 Next is a photo below of the Tim Hortons coffee cup I use to carry around brushes, a pen, tweezers, nail clippers, swizzle sticks, a pair of glasses, and an X-acto knife. If I have a bottle of paint that's almost empty I will store it upside down. The cut-away cup on the bottom is to be filled with water when painting. I often recycle either a disposable coffee cup lid or use common brown paper as a paint palette. As for painting technique, I black prime first, then a light white drybrush, then begin painting...usually in too great detail. (grr.) I paint from the outside in. That is, outer coat then accoutrements first and on until painting the flesh almost last. I find it easier to jam the tip of a loaded brush up against clothing that way. Then again, I also probably use a brush that's too small.  meh. I always try to assembly line in batches of 2 or 3 dozen. When finished painting, I often lightly white drybrush everything again and finally spray / seal with a clear matte finish spray.  (If I've painted 1/72-scale soft plastic figures, I make certain to spray / seal with Plasti-Dip spray.) 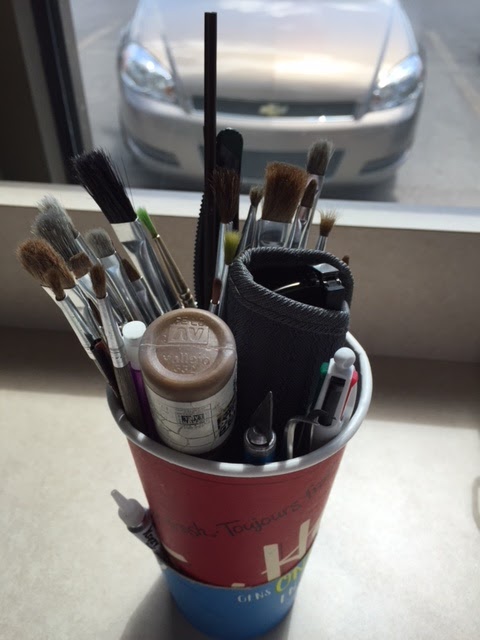 Finally, here's the fishing tackle box I use [sideways view] to transport figures in along with a compartment for random figures, another pair of weak glasses, old sticks for stirring paints, a hand drill & drill bits, and a .22 calibre brass bullet casing (…?). 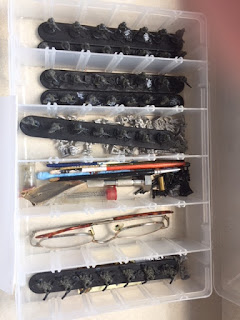