Fair Warning: This post, entirely on converting 15mm WWII Russian T-26 tanks, arises from a prior year's desire to save on expenses for creating armoured tanks for the Chinese Kuomintang's 200th Division. While deemed successful by yours truly, it remains questionable whether such efforts are warranted given a few extra dollars being available.
After an 18-month delay, I completed the conversion of four 1/100-scale (or 15mm) Zvezda Model 1939 T-26s into the Model 1933 T-26s with the help of a couple of "surgical" instruments and the Flames of War [Battleline] turret pack, SU005 T-26E Turrets, which includes 4 turrets. One may use an X-acto knife to shave away the plastic Zvezda model's "chassis ring" that accepts its Model 1939 turret. Likewise, the bottom protrusion of the resin FoW Model 1933 turret must be sanded away using sand paper. Once the M33 turret suitably sits flush atop the Zvezda tank chassis, a hole must be drilled into both the tank chassis and turret. For centering the hole into the turret, first use a pencil to mark the ring's centre then use a small hand drill bit to create a small sink hole. Follow this up using a power drill due to the turret's resin density that all but prohibits the use of a handrill. I used a drill bit the same diameter as a wooden shish kebab dowel found in grocery stores. 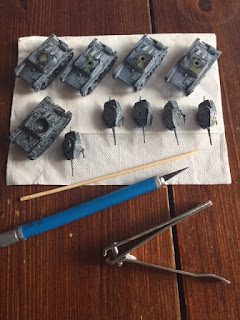 Note the above photo includes (a) one FoW T-26 with its turret protrusion left as is, (b) four Zvezda T-26 models with their chassis rings carved off, (c) four FoW T-26 M33 turrets with the bottoms of their turrets sanded down, and (d) one wooden shish kebob dowel. Once drilled out, I epoxied the dowel into the turret's hole as seen in the photo below. 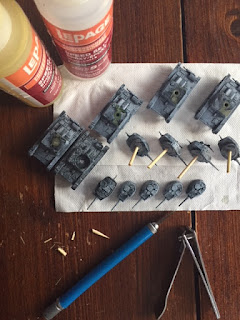 For the turrets only, note the size difference between the FoW Model 1933 turrets and the Zvezda 1939 turrets. The size match between the hulls of the 15mm FoW T-26 vs the 1/100-scale Zvezda T-26 isn't perfect - witness the above photo's comparison. The FoW model is about 1 mm wider and 1 mm shorter than the Zvezda model. However #1, I consider these differences insignificant. It is very difficult to angle a power drill exactly 90o to the bottom of the turret when drilling, which results in the dowel being set off at an angle. However #2, this shouldn't adversely throw off the turret's final positioning. (The FoW's resin turrets have a bit of play in their turret well anyway so even these models have a bit of give unless held fast by magnets.) If any epoxy glue seeps out of the hole upon hardening, it should be carefully trimmed away with an X-acto blade.
Once accomplished, a column of five unpainted M33 T-26s emerges. In the photos below, the lead tank is the FoW model with the Zvezda hulls trailing behind. (One turret MG broke of whilst cutting the wooden dowels down to size.) 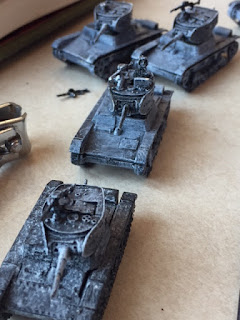 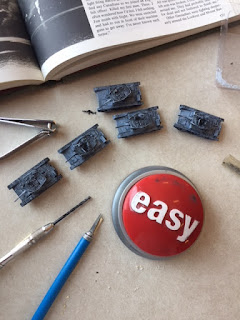 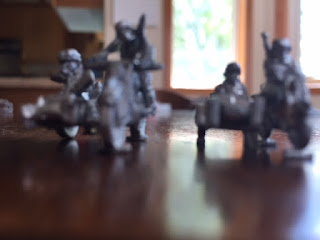